Update about Matt, his next court hearing.

Update on Matt’s situation from No Political Repression:

Matt is being held in the Secure Housing Unit (isolation) at SeaTac. His lawyer guesses this is because he’s never been to prison before. He says he’s doing fine; reading trashy romance novels because that’s all he has access to. He may be moved to general population soon, where he’ll be able to play chess and have greater access to a phone.

The prison is so far not giving Matt access to all-vegan food, though he is applying for vegetarian food. We suspect he’d have much better access to vegan food if people resumed calling in and urging that he receive the food he needs!! (206-870-5700). 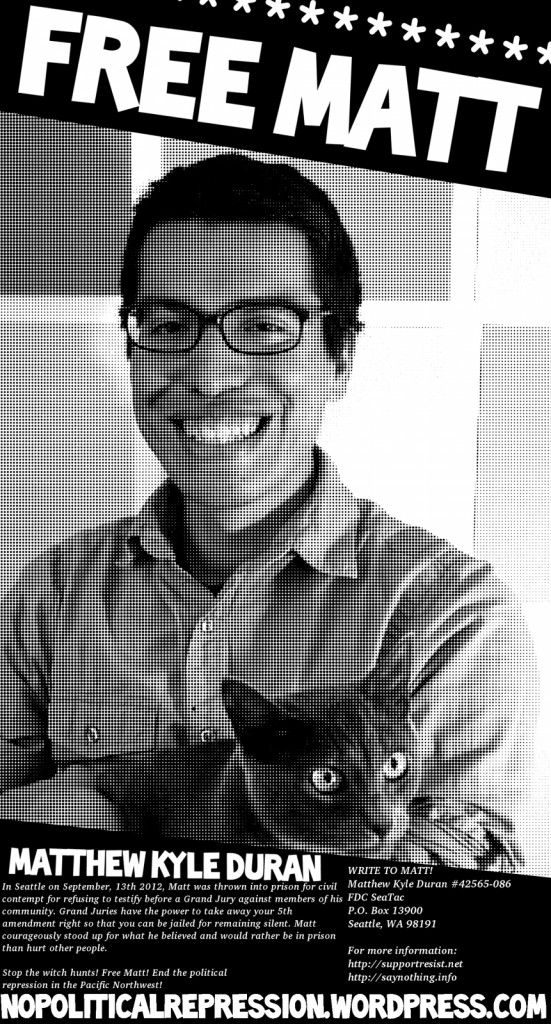 Our friend and comrade Matt Duran was taken hostage by the state on September 13th for refusing to testify to a secret grand jury. Right now he is being held at the SeaTac federal prison for an undetermined period of time. He has an upcoming court appearance where it is likely the prosecutor will ask if he still wants to refuse to testify after spending 2 weeks in federal prison, and Matt will continue to refuse to snitch.

It’s important for us to pack the courtroom to show we still have his back – both for him personally, and so the prosecution knows that too. We believe the hearing is going to be at the federal courthouse in Seattle but will update this when we confirm.