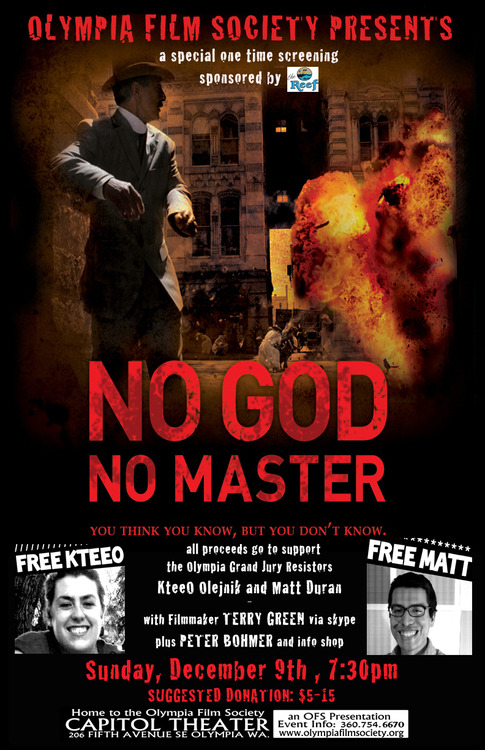 “No God, No Master” benefit screening for NW Grand Jury Resisters at The Olympia Film Society

Director Terry Green will be doing a Q&A via skype along with Pete Bohmer, faculty at the Evergreen State College.

In the summer of 1919, U.S. Bureau of Investigation Agent William Flynn (played by David Strathairn in what Stony Brook Press calls “…his best performance since his 2005 portrayal of Edward R. Murrow in Good Night, and Good Luck…”) is quickly immersed in an investigation that uncovers an anarchist plot to destroy democracy, setting the stage for a timely drama with resoundingly similar parallels to the contemporary War On Terrorism. With a cast of characters ranging from Emma Goldman, Sacco and Vanzetti to John D. Rockerfeller and J. Edgar Hoover. “No God, No Master” presents a gritty but beautifully rendered period piece set in the early 20th century that is an eerie parallel to the war on political outsiders and immigrants that is going on today.

“Emotionally persuasive performances, atmospherically evocative, cogent storytelling on a shoesting” says the Milwaukee Journal Sentinal. This on-screen chapter out of American Anarchist history will have a Q and A via Skype Director Terry Green to answer your questions. In a recent interview he noted that ‘The disintegration of civil liberties during times of social unrest is nothing new in America.’

This screening is a benefit to support the Pacific Northwest Grand Jury Resistors. All proceeds from this event will go towards supporting those imprisoned for refusing to cooperate with the Grand Juries that are convening in Seattle. There will be an information table and additional speakers at the screening.