This Friday, December 14th, Maddy Pfeiffer will go into the federal courthouse in Seattle, WA. A solidarity demonstration will gather at 12:30PM at 700 Stewart St. Inside, Judge Richard Jones will preside over a hearing to determine if Maddy is in contempt of court and whether to send them to the Seatac Federal Detention Center until as late as March 2014, when the grand jury ends. The prosecutor could possibly charge them with criminal contempt of court, which has no upper sentencing limit. 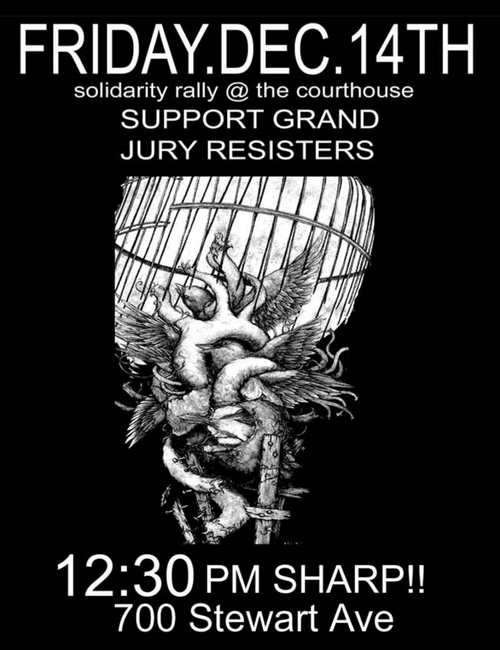 Maddy has been subpoenaed as part of the ongoing grand jury investigation (and resistance) into the assault on the federal court of appeals in Seattle on May Day 2012.  Early in the year, Occupy Oakland had called for a global general strike on May Day. Pacific Northwest anarchists rose to the occasion. Widespread protest by leftists was joined by a violent anti-capitalist black bloc. Targets included banks, journalists, expensive cars, the federal court house, and numerous businesses. Seattle’s self-appointed superhero even got accidentally maced by his own idiot sidekick. Seattle hadn’t suffered such wreckage in some time and damn, it felt good!

The police response to the black bloc demonstrated the inability of Seattle pigs to pick up on what an “anti-capitalist march” entails. After the bloc dissipated into the crowd, the nonprofit liberal mayor issued an emergency decree which extended police powers in downtown. But the tone for the day had been set: marches throughout the day were more confrontational than the typical Seattle passive-aggressive demeanor typically allowed. Pigs were assaulted all over downtown by people clearly unaffiliated with the black bloc.

Bruised by the rioters and embarrassed by their failure, the pigs turned to two strategies: one involved the modern surveillance machine, the other is the grand jury. SPD analyzed thousands of photos and video, releasing numerous photos of people it alleged committed various crimes against pigs and property. Some have been charged: recently, five people were charged with some combination of riot, assault, and malicious mischief. Several others have already been accused and tried.

The state is using the grand jury to allege that certain anarchists attacked the federal courthouse. While the court house was attacked in Seattle, the repression from the grand jury has fallen hardest in the form of raids and subpoenas on Portland and Olympia. An “accidentally leaked” FBI affidavit alleges that several anarchists from Portland traveled across state lines with intent to riot, damaged federal property, and conspired to commit those crimes. The combined sentence for those four charges can reach 25 years (18 USC § 2101, 18 USC § 371, 18 USC § 1361).

Maddy declined to testify at their grand jury hearing in November; their lawyer successfully argued for a continuance on the contempt of court hearing, leading to the December 14th contempt hearing. Further, they posted a transcript of the grand jury hearing. By steadfastly refusing to answer any questions, Maddy demonstrated their refusal of the state in spite of its attempt at repressing the spread of anarchy. In their transparency, Maddy showed how to maintain the confidence of all who fight the state. A compilation of statements (including one by Maddy) and communiques for actions inspired by the grand jury resistance is posted here.

With love for the silent ones and for Ravin, a Ke$ha video was re-made and posted to the Internet. http://www.youtube.com/watch?v=KkZ0oLMQzVs

Confidential to Judge Jones, Michael Dion and Jenny Durkan: This was written without the input or knowledge of Maddy Pfeiffer or their support crew. So fuck you, you stupid pig pieces of shit.